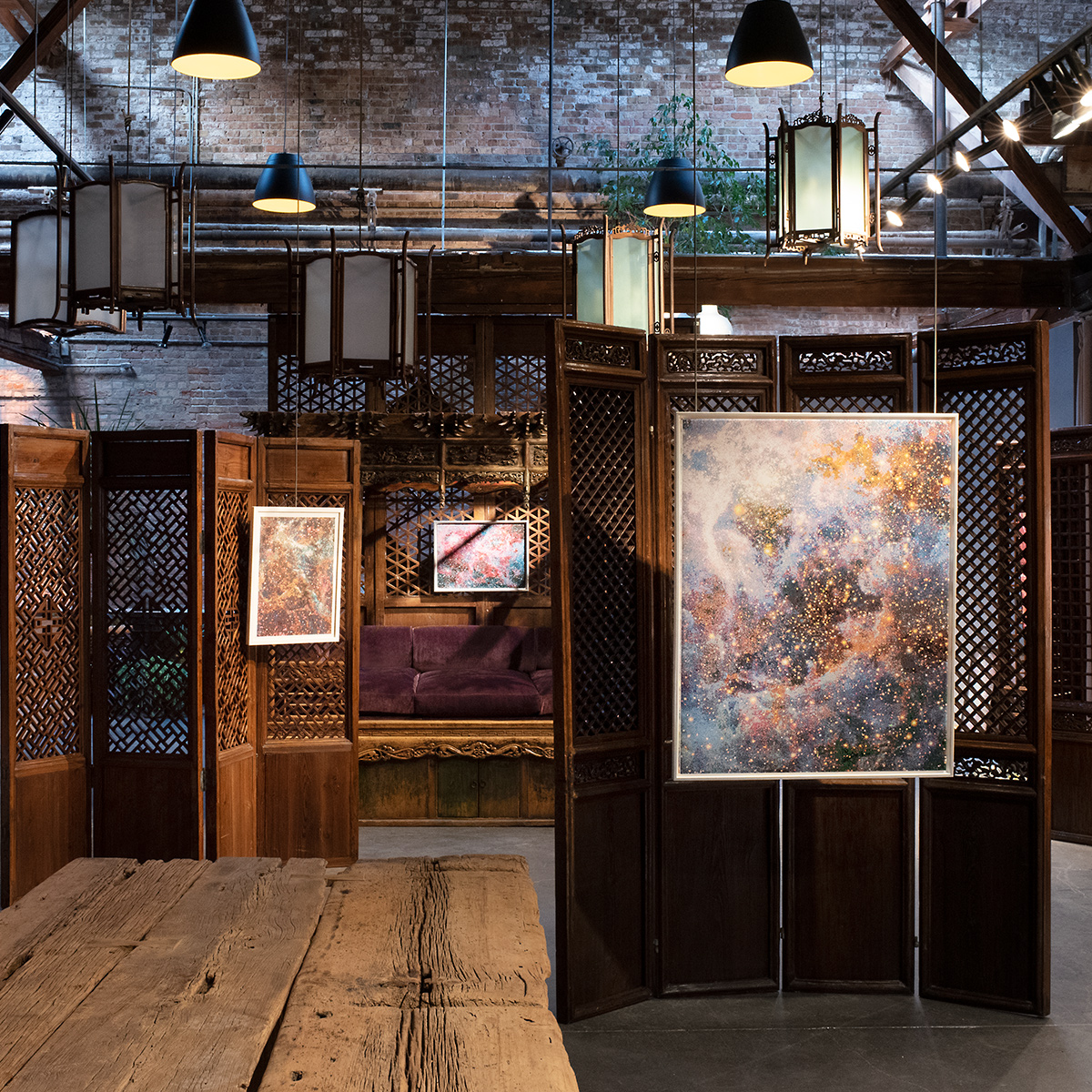 Born in the Netherlands in 1979, Jan Pieter Fokkens is part of the last generation to have an analog childhood. His abstract art examines the effects that advancing technologies have had on our understanding of the universe and our place within it. In his work, Fokkens’ hand-paints and draws intricate, color saturated patterns inspired by digital images – often, images of the universe taken by the Hubble Space telescope.

Recently, we sat down with Jan at PAGODA RED to discuss his fascinating and unique process.

How do you chose which images to use from the Hubble Space Telescope?

“I’m fascinated by images I don’t understand and that go beyond my imagination — images that capture a new sense of reality. For example, photographs of nuclear explosions that freeze time at 1,000,000th of a second or images of distant galaxies lightyears away.” 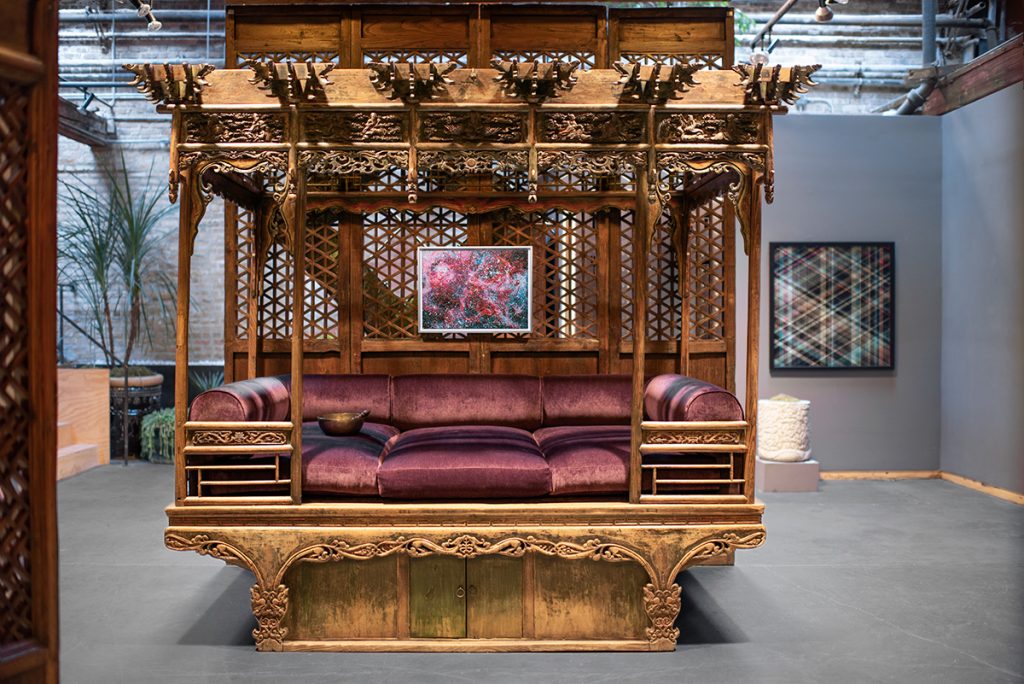 “When I make a work, I want the viewer to look and wonder where is up and down and to lose themselves and think about reality and perspective and how some of that is something we were taught. I strive to create work that is very open and an experience that’s new, not something that’s familiar.

In each piece, there are so many way in which the imagery works. There is movement in the still images, things that come forward as you view. When I look at images from outer space, I am selective and know the way colors will come together… It’s been a process.” 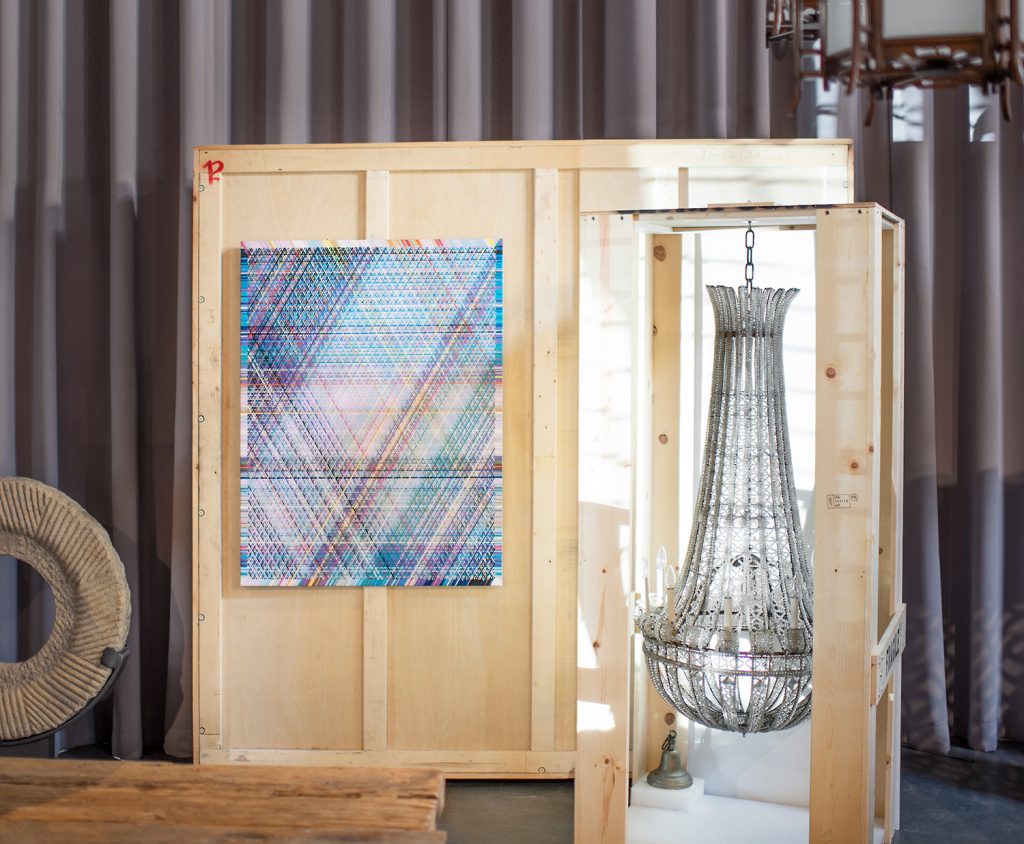 “In ‘VFTS-682’, angles are overlapping and every overlap creates a star pattern. The colors that I’m using merge to make this happen. It’s a little different every time.”

Can you tell us a bit more about how you create each painting?

“I work with what I call algorithms. They’re different ways of abstracting an image. Alongside an engineer at Google, I developed a computer program that creates these algorithms. Although the software was made 10 years ago, it can generate entirely new algorithms based on my input today.”

Behind the scenes at Jan Pieter Fokkens’ artist studio

“I have a set of markers and I scan all the colors based on the paper I’m using. I put those [color] values into the program and it helps me decide what markers to use and how to divide/abstract the image. There is a lot of decision-making that is done by the computer. In that sense, I’m a machine that executes. I like to take a step back, where what I am executing is not about the color I’m feeling.” 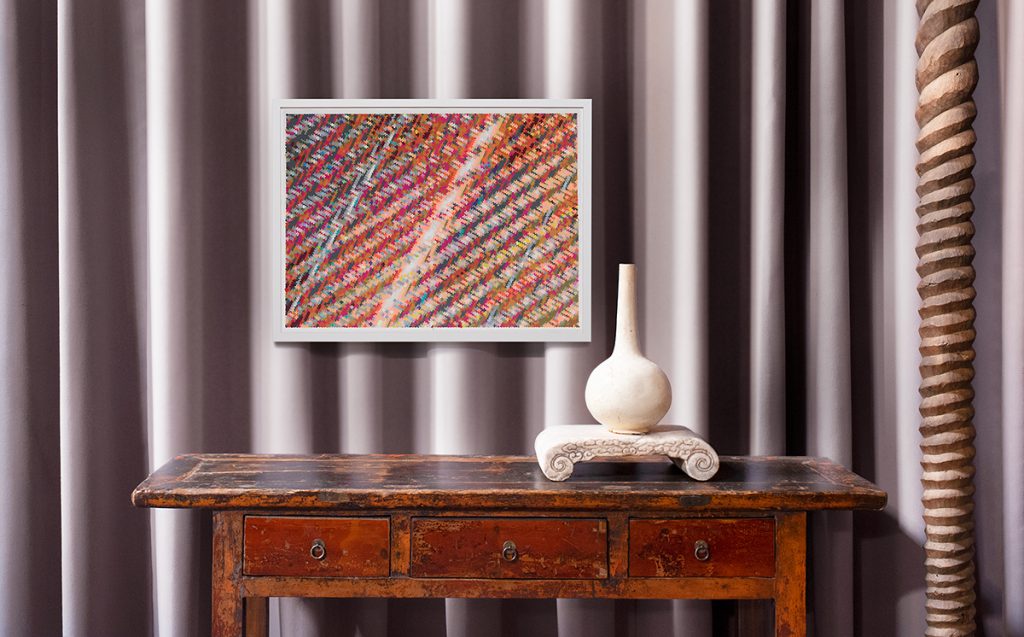 So each color is derived directly from the Hubble space photography?

“You’re really dealing with fake images. These beautiful images of outer space are not real. There is a team of people at  the Hubble Space Telescope that beautifies them. They’re based almost on romantic paintings, the color schemes. If you would fly in a space ship, you wouldn’t be able to visit a Wolf-Rayet star. It’s 150x brighter than the sun. We’re served a beautified version of it.” 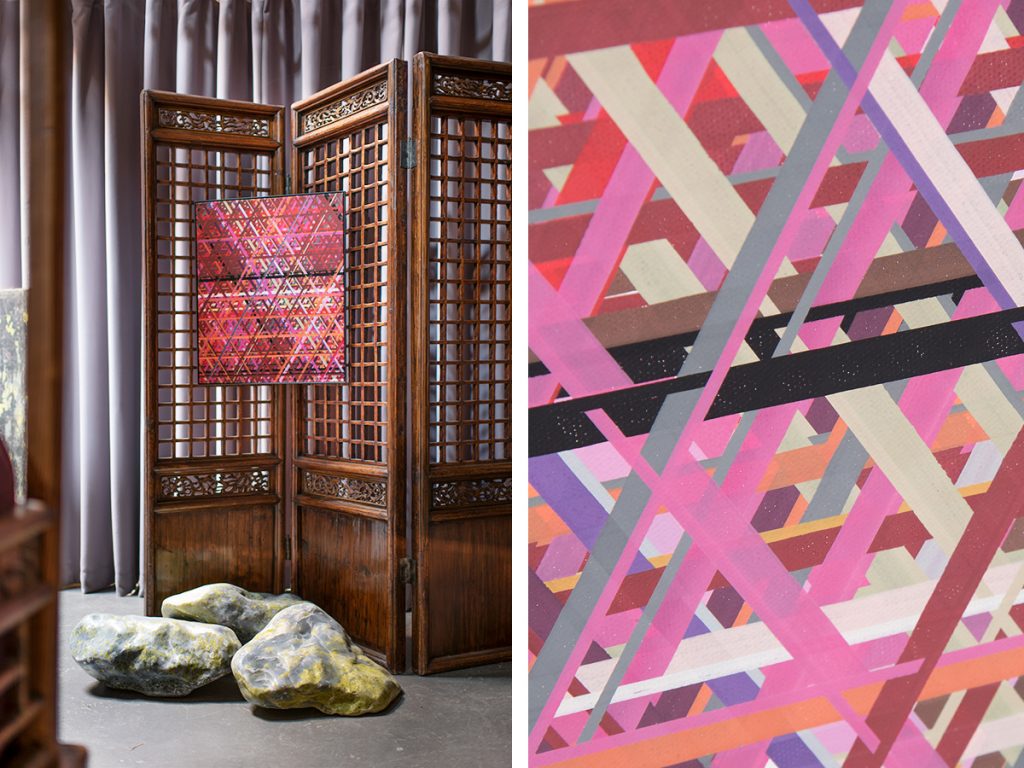 Has your art always been based in science?

“Growing up, I thought I wanted to be a scientist. I have a scientific education, but I was always fascinated by physics and chemistry, where we would talk about concepts like metaphysics — the kind of the creative thinking that was involved to conceptualize a black hole… First, you have to imagine that something like that would balance everything in the world. That pulls me. 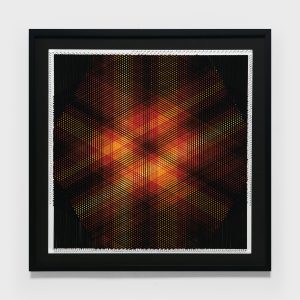 My work ‘CJPF020: Study for Event Horizon’ is the first image of a black hole. How do you make a representation of something that’s beyond your imagination? Heino Falcke of Radboud University in the Netherlands and chair of the EHT Science Council explains it best: ‘If immersed in a bright region, like a disc of glowing gas, we expect a black hole to create a dark region similar to a shadow — something predicted by Einstein’s general relativity that we’ve never seen before. This shadow, caused by the gravitational bending and capture of light by the event horizon, reveals a lot about the nature of these fascinating objects and allowed us to measure the enormous mass of M87’s black hole.’

Simpler, we can’t see the black hole itself, but we can see the shadow it creates. 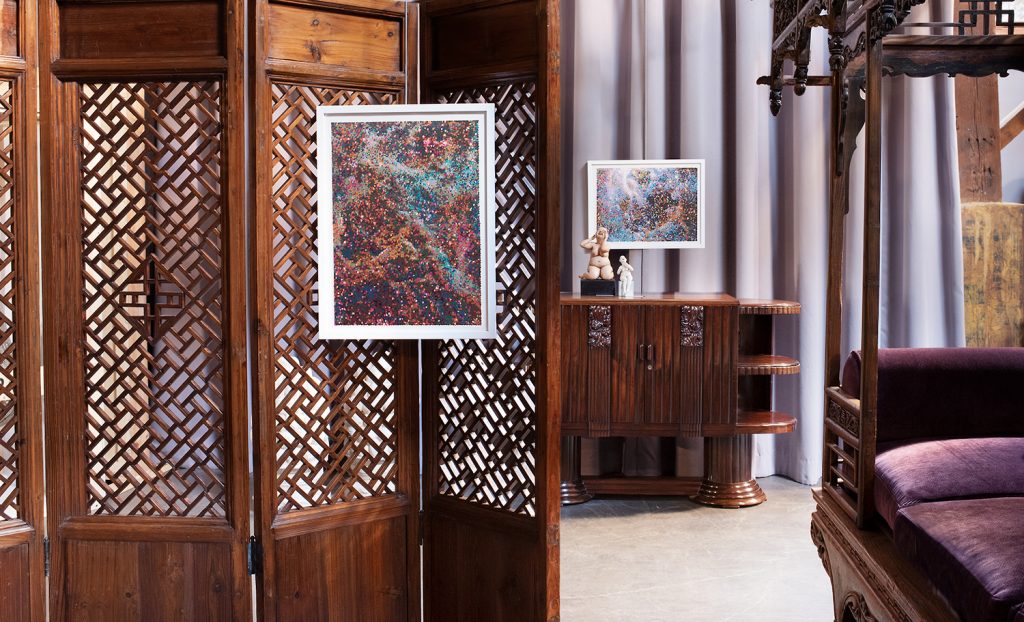 “I go back to Mondrian; I remember seeing ‘Composition No. 10’ in black and white for the first time at the Kröller-Müller Museum, where his way of abstracting reality was based in a more spiritual sense — a search for universal values and aesthetics. He was a very spiritual person. He proclaimed in 1914: ‘Art is higher than reality and has no direct relation to reality. To approach the spiritual in art, one will make as little use as possible of reality, because reality is opposed to the spiritual. We find ourselves in the presence of an abstract art. Art should be above reality, otherwise it would have no value for man.’ But, his way of abstracting reality became more and more grid-like and a space to represent something you can’t do with everyday objects.

I see these concepts finding their way back into digital photography — a pixel or tiny object where you can manipulate reality. 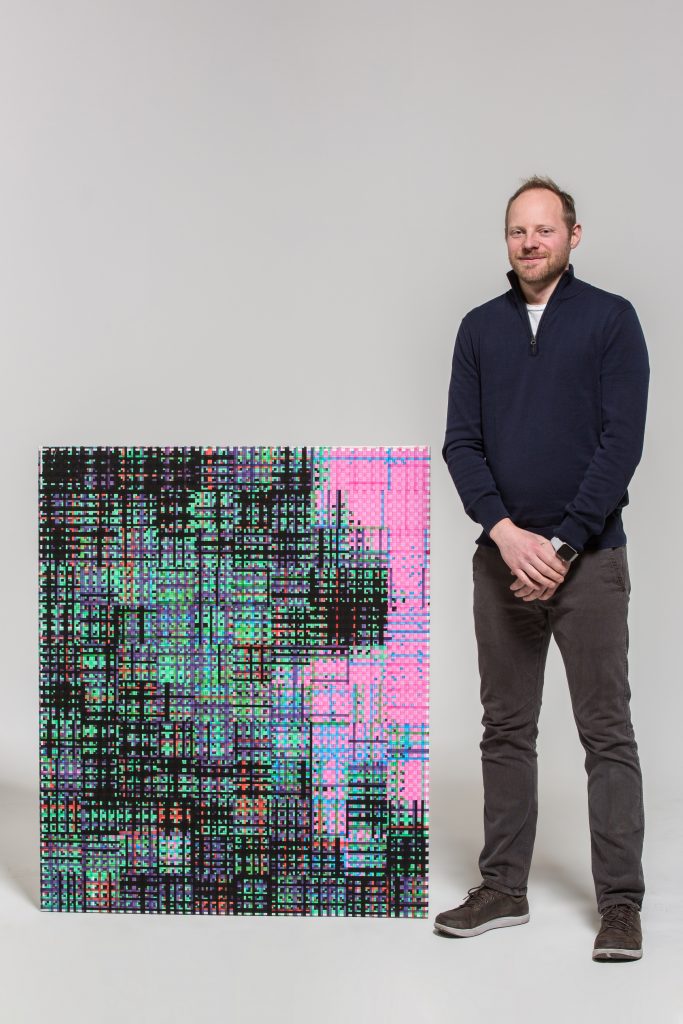 There was a Carl Sagan quote, ‘We are a way for the universe to know itself. Some part of our being knows this is where we came from. We long to return. And we can, because the cosmos is also within us. We’re made of star stuff.’ At some point we were all an element in outer space that found its way. In a sense, we’re all a pixel or molecule.”

To read more about Fokkens’ work, visit his website. 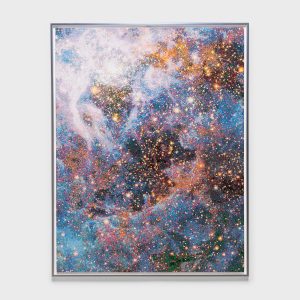 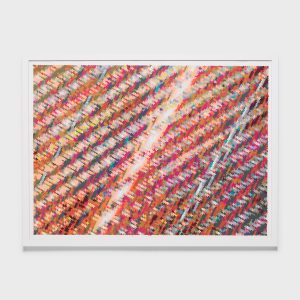 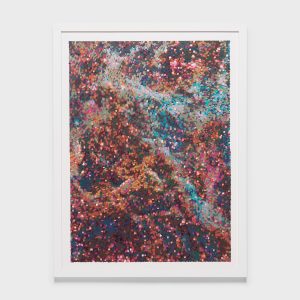